The war has begun. From their camps, both Sony and Microsoft have blown the horns of war, and now the battle begins for the next half-decade or so. Following Mark Cerny’s deep dive into the architecture of the PS5, we now have an idea of what both consoles are packing under the hood.

We have yet to see any practical gameplay from Sony – the recent breakdown was very tech heavy and we may have to wait until June to see gameplay from both companies (with the ghost of E3 looming over them). But that doesn’t mean we can’t feast on what information we have, sharpen our blades, and argue over which console is better. Let’s jump into it.

With each new video game console cycle, everyone is interested in one thing: how strong are they? After years of development, consumers are hungry to know how they compare not just to one another, but the consoles that came before them. At face value, going on pure power, it looks as if the Xbox Series X wins.

Don’t leave just yet though! It’s not so simple. Here are the details, courtesy of Eurogamer: 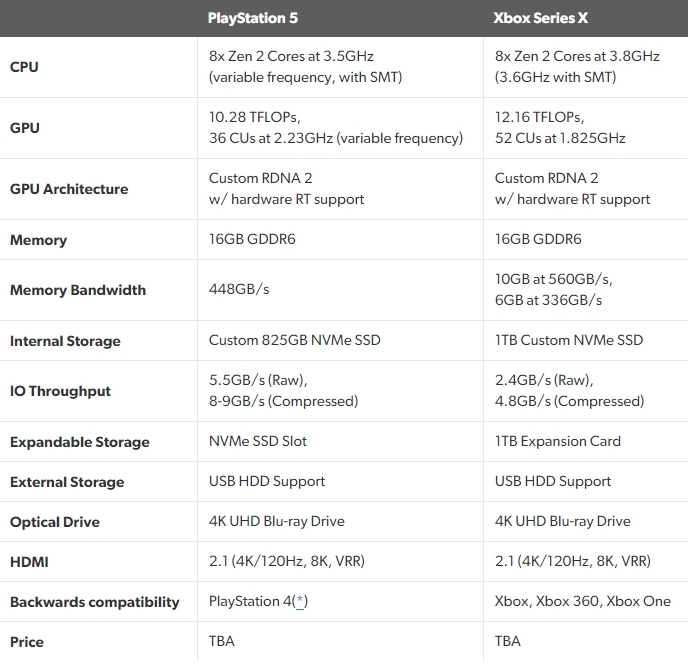 The first number most look at is the teraflops from the GPU. The Series X’s is higher, ergo it’s better. Not quite. The PS5’s CPU and GPU are variable, meaning they can adjust how much they use depending on requirements. It can adjust on the fly, so if a game is using too much power, making the console noisier or hotter, it can adjust and bring it back to a normal level. In simple terms, the Series X is going for straight up power and muscle, whereas the PS5 is trying to stay nimble and versatile. The bulky warrior versus the sly rogue, to use RPG nomenclature.

Both consoles are pushing the envelope on next-gen features, with ray tracing being the big buzzword. Microsoft have already shown off the gorgeous feature in Minecraft on the Series X and Mark Cerny let us know just how important it is to the PS5 as well. Ray tracing is a way of implementing realistic lighting into games. It renders paths of light that interact with the world in very real ways. The PS5 showcase also touted its use for audio, allowing it to bounce around the environment, and other elements such as shadows and reflections.

So far, so even, but there is one area that is shaping up to set the two consoles apart.

The solid state of play

Both consoles were proud to show off their solid state drives (SSD). Mark Cerny talked of how he regularly visits game developers to gauge their opinion of what they want from next-gen consoles. The majority said SSDs due to their capability to load resources much faster than regular HDDs.

Looking back at the table above, it would again appear that the Series X is winning, with its 1TB SSD compared to the PS5’s odd 825GB SDD. But we want to pay attention to the IO throughput row as this tells us how fast the SDDs are. As you can see, the PS5’s is much faster – pretty much double. Mark Cerny put it into actual figures: the PS5 can load 2GB of data in 0.27 seconds (that is their target, at least), which makes it 100 times faster than the PS4.

It’s made some developers incredibly excited as it gives them the freedom to design how they wish. It would mean fewer tricks would be needed to hide load screens and remove the need to design levels with tight corridors or elevators, things used to reduce the amount of quick loading the console needs to do. So if there is an aspect that will truly make the next-gen an advance, it’s something like loading times.

But Microsoft may still have the last laugh; many third-party developers will want to develop for both consoles and will develop to the lowest common denominator. In this case, the Series X. The only ones really able to make the most of the PS5’s SSD will be first-party developers.

Also worth noting is storage expansion. Both have said you can add to the storage, but the Series X will require a proprietary SSD and, while yes you can use standard PC SSDs with the PS5, only certain ones will be compatible and will require further testing by Sony.

An even playing field?

If your question is which is better, then the answer is: neither. Both have their pluses and minuses, as is the norm for console wars. It will ultimately come down to your personal preference: which first-party titles will you prefer? We should hopefully find out more about that soon.

Of course, the console you currently have might affect that decision. Both consoles will have some form of backward compatibility, though the Series X seems to be much more substantial in that regard. Anything that is backward compatible with the Xbox One will also work on the Series X and some Xbox One games will even have enhancements on the new console. Conversely, Sony is starting from scratch, though they say most of the top 100 most popular PS4 games will work at launch. As for PS3, PS2, and PS1 games, maybe don’t hold your breath.

Whichever you prefer, you can’t deny this is an exciting time for gaming as we approach the cusp of a new generation. This autumn/winter – current events willing – we should all have our hands on a shiny new console. And if that doesn’t fill you with childish glee, I don’t know what will.

At REALTIME, we can’t wait to see what the next generation will bring. Our love of games bleeds into our work, so if you have an exciting next-gen game you want to talk about, feel free to get in touch with me at callum.sibley@realtimeuk.com.