It was a game of two halves at this year’s LA Auto Show, known now as ‘Automobility’ to underline the shifting sands in ownership and propulsion technology within the industry. A total of 67 global debuts underline this show’s status as one of the most significant on earth and half of these debuts were EVs which, in the context of a number of big block V8 stories made for an interesting yin and yang of the modern-day US car market.

In addition to the stunning SC2 concept, Karma Automotive made a huge splash at Automobility, showcasing the voluptuous and encouragingly production-ready Revero. New for the show was the re-engineered and further-enhanced Revero GTS – still sporting the 1.5l internal combustion engine from the BMW i8 in the front and hybrid generator in the rear. A hugely special car to look and spend time inside. Just smell that Bridge of Weir leather too…

Audi debuted its attractive e-Tron Sportback model, a second derivative of the e-Tron full EV. The Sportback style brings with it greater aerodynamic efficiency than the standard car and so owners can enjoy an extra 6 miles’ range or best part of a whole average journey extra in LA between charges.

So interesting on the Audi stand too, to see the sound of the internal combustion engine actively celebrated less than ten yards away from the e-Tron. This exhibit allows you to put your foot down and experience the growl of either the RS5, TTRS or R8 powertrains. Game of two halves, y’see.

This gullwinged EV SUV concept gives us a powerful indication of the next Niro. I’d love to have been in the meeting when they decided upon the name…

Motor Trend’s 2020 Car of the Year may perhaps sport the same styling details as it always has but the bold decision to move to a mid-engined layout has driven a significant change in overall proportions. Feedback from the world’s press tells me that this was the right call to make.

The wait for this relaunched icon is over for US eyes and we were treated to three versions on the Land Rover stand. Boasting mild hybrid technology towards the top of the range and with more green technology on the way, I for one was hugely convinced by this, Solihull’s latest upscale mud-plugger. It has managed to strike the perfect balance between solidity and out-and-out desirability – let’s hope the road tests also bear this out.

Only in the US: The Dodge Challenger cocked a snook at the environmental lobby, celebrating 50, that’s right, 50 years of the muscle car. This anniversary edition comes equipped with the not-at-all-apologetically-named Hellcat Redeye V8 engine, pictured below. Maybe the last hurrah for this kind of car but no-one I spoke to was of the opinion that this didn’t deserve its place at the show. 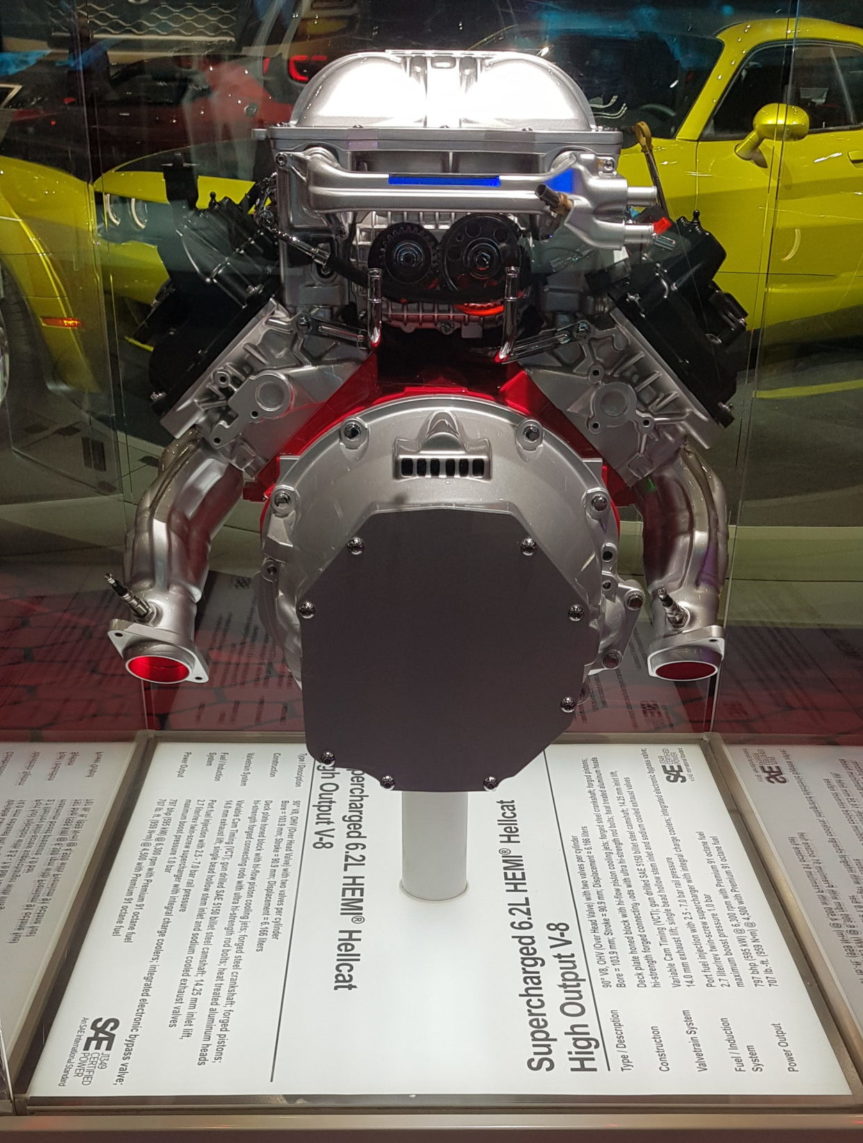 Porsche had availed itself of a completely separate room to show its latest range of staggeringly well-engineered new cars for the US market. It was a privilege for me to take a good look at the new Taycan EV, which hits all the numbers we’d expect of it, including the sticker price too, of course. Will no doubt do so very well all over the world nevertheless.

Boasting a very competitive >300 mile range from its 332 horsepower EV powertrain, the Mach-e is the blue oval’s take on the overwhelming trend in today’s search for environmentally responsible mobility, ‘bringing the famous pony into the electric age’ is how it is billed. Very neatly judged, Ford reckons that there might be so much equity in the Mustang nameplate that they’re even considering setting it up as a sub brand. A gallop too far? We’ll have to see…

So, yes, a uniquely American interpretation of the state of the art; such an interesting story of stark contrasts. I’d love to fast forward ten years to see what’s on show then!